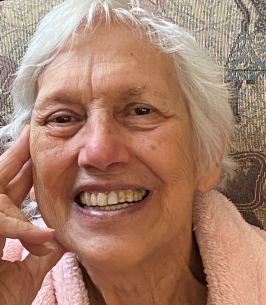 Born August 19, 1935 to Pasco Antulov Fantulin and Carmela Rajka Vlahov, she was the second of five children and grew up in Ft. Bragg, California.

Following high school she attended City College of Santa Barbara where she had the opportunity to study art, her lifelong passion. For more than thirty years she worked for the USPS, first in San Francisco and subsequently in Maryland.

Following her retirement, she moved to Kingwood and then to Morgantown where she was actively involved with the WVU Homestay program for international students, and the Council for International Programs. She enjoyed introducing many students over the years to life in America and to taking them on trips to New York City, Washington, DC, and many other places. She also found outlets for her creativity through Zen Clay and her work with quilting groups. Anka had a love for animals, and also enjoyed sailing during her time Annapolis, MD.

She was the loving mother of Paul Robert Fantulin Laplante, who predeceased her. She was also predeceased by her parents, her brothers, Paul and Edward, and her sisters Rose and Peggy.

A gathering of Anka's family and friends to honor her life and legacy will be held at Smith Funeral & Cremation Care, 108 Holland Ave., Westover / Morgantown on Friday, August 5th, 2022 from 4:00 PM until 5:30 PM. Beginning at 5:30 PM, those in attendance will be invited to share their stories and fondest memories of Anka. Burial will take place at a later date in Ft. Bragg, CA.

The gathering will be live streamed from the funeral home's Facebook page beginning at 5:30 PM, where those viewing it will also be able to share their memories in the comments section.

While flowers are welcome at the funeral home, contributions in Anka's memory are suggested to any charity that benefits the welfare of animals.